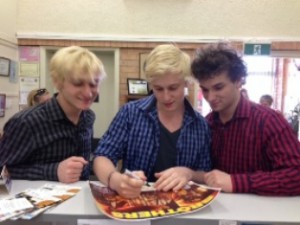 In what was considered a major coup for Ballina, the Brothers 3 were released from their X-Factor commitments so they could kick off the Ballina Coastal Country Music Festival with a special, free performance for the public at Cherry Street Sports on the Thursday night.

Their first stop was the Paradise FM studio where they greeted a couple of lucky fans who made it to the studio before chatting on-air with Warwick Manning.

As for their show – it was HUGE, with Cherry Street Sports being completely packed. From reports – their musical talents aren’t limited to the TV either, with the Brothers keeping the crowd, featuring people of all ages, entertained.